New England Baptist Hospital–More Than a Century of Legendary Service 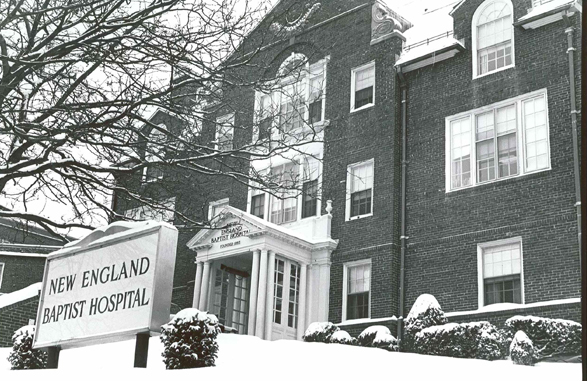 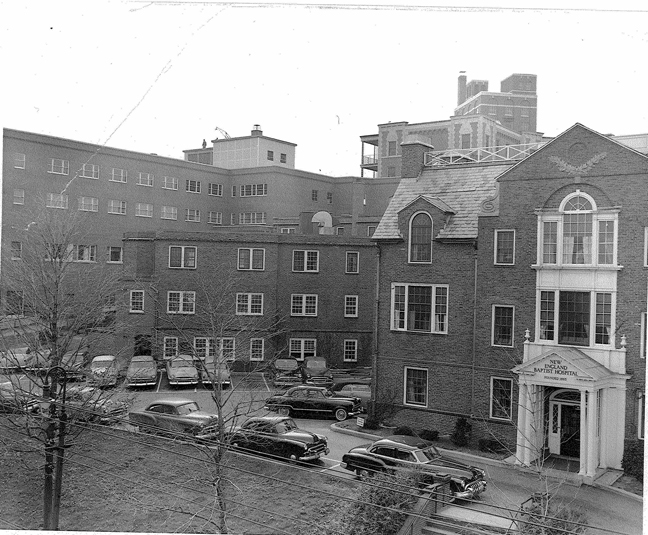 From its humble beginnings in 1893, NEBH has adhered to its singular devotion: providing the highest quality and most compassionate patient care available. That dedication is still reflected today in the faces and the work of those who strive daily to provide that care—the men and women of the New England Baptist Hospital team.

We began our work over a century ago, in a single room located in a building adjacent to the Ruggles Street Baptist Church in Roxbury. There, Dr. and Mrs. Francis F. Whittier, along with Dr. H. Warren White and three other dedicated physicians, established a free dispensary to provide medical care for the community’s poor.

In a short time, several other dispensaries had been established in Roxbury and the South End, treating over 2,500 people each year. The increased demand and need for these medical services led to severe overcrowding and unsatisfactory conditions.

In 1893, Dr. Whittier prevailed upon Rev. Everett D. Burr, Pastor of the Ruggles Street Baptist Church, to present the problem to the Boston Baptist Social Union. His recommendation led to incorporation of the Boston Baptist Hospital that September.

Located in a house at 47 Bellevue Street in the Longwood section of Brookline—on the site of the former New England Deaconess Hospital—the doors of the newly incorporated Boston Baptist Hospital were first opened to patients in June 1894. Dr. Whittier performed surgery there that same day.

The Hospital quickly outgrew its new location, and the search began for a suitable long-term site. The Hospital purchased the Parker Mansion on Parker Hill in Roxbury, and by 1896 relocated to its present site atop Mission Hill.

In 1897, the Hospital changed its name to New England Baptist Hospital to reflect its growing constituency. What began as Dr. and Mrs. Whittier’s dream of creating a Baptist hospital in Boston had become a reality.

The groundwork was laid for what has today become one of the leading health care facilities in the world, serving patients of all faiths from New England and beyond.

During a time of deep financial distress, Col. Edward H. Haskell, NEBH’s second President, helped guide the Hospital’s course “from an obscure charity to a leading position in the community—from a few rooms in a private house to the vision of a complete and worthy institution fully equipped with every facility for the finest service.” Born in Gloucester in 1845, Haskell joined the 23rd Regiment of Massachusetts Volunteers at age 16 and served through the Civil War. He served as NEBH president from 1898 until his death in 1924.

In the 1920’s, as one of the world’s most eminent surgeons, Dr. Frank H. Lahey revolutionized thyroid surgery. Taking the lead from his close friends Will and Charlie Mayo who founded the Mayo Clinic in Minnesota, Dr. Lahey recruited experts from all branches of medicine to form the Lahey Clinic.

Although the Hospital’s affiliation with the Lahey Clinic ended in 1980 when the clinic moved to Burlington, the spirit of caring that Dr. Lahey bestowed on his patients lives on today at the Hospital.

Dr. Otto E. Aufranc was the architect of the Hospital’s first Orthopedic Department in 1968, bringing to the Baptist his talented team of young physicians from Massachusetts General Hospital.

During his five-decade medical career, Dr. Aufranc’s many innovations included a leading role, along with Dr. Roderick H. Turner, in the development of one of the first American replacement hips, the Aufranc-Turner. The prosthesis was further modified in 1980 and the name Scheller added to it in recognition of input from another Baptist doctor, Dr. Arnold D. Scheller, Jr.

As a lasting tribute to his skills as a surgeon, teacher, and scientist, the Aufranc Fellowship was formed in 1970. Today, Aufranc Fellows who have received specialty orthopedic training at NEBH are practicing in hospitals around the world.

Dr. Turner, who was an Otto Aufranc Fellow, helped to build the orthopedic program at NEBH in addition to his work developing and improving of the techniques and tools used in hip and knee replacement. He spent his three-decade career at NEBH, working to establish the Baptist as a premier musculoskeletal hospital nationally, provide exceptional care for his patients, improve joint replacement surgery, and educate the next generation of joint replacement surgeons. Dr. Turner also established the Roderick H. Turner Fellowship at NEBH to advance fellowship training in perpetuity.

Continuing a Legacy of Excellence

The formation of the Hospital’s Sports Medicine division in 1986 continued NEBH’s commitment to our patients’ health and well-being. In 1987, the Baptist assumed the role of official team hospital of the seventeen-time world-champion Boston Celtics.

In 1995 the Hospital established the New England Baptist Bone & Joint Institute. Under the direction of Dr. Benjamin E. Bierbaum, Chairman of Orthopedics, the Institute specialized in all aspects of musculoskeletal health.

The Institute’s mission had been three-fold: First and foremost, to provide coordinated, individualized patient care; To educate health professionals, patients and the community; and to conduct relevant research into the causes and cures for musculoskeletal conditions.

In 1996, in an effort to detect cardiac abnormalities in the professional, student, and recreational athlete, the Hospital created the Thomas W. Nessa Center for Sports Cardiology. The Center complements our focus on sports medicine.

In 2004, Dr. Benjamin Bierbaum stepped down after 30 years as Chair of the Department of Orthopedics, turning the reigns over to Dr. John C. Richmond, who served as Chair until 2015. David Mattingly, MD currently serves as Clinical Chair of Orthopedics and Surgeon in Chief.

Since 1958, the single red rose has stood as a flourishing symbol of the Hospital’s personal care. The custom of welcoming each new inpatient and surgical outpatient to the hospital with a red rose was initiated by the late Carl J.B. Currie, a trustee of the Hospital, who established the Carl J.B. & Olive Currie Rose Fund to perpetuate this program. This red rose of welcome has now become the hallmark of New England Baptist Hospital. Well over a quarter million of these fragrant tokens have been distributed to patients in the past 50 years, currently at a rate of over 300 per week.