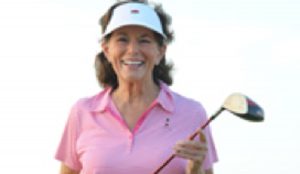 “Golf is the ultimate challenge—it’s a humbling game,” says Natalie Jacobson from her home on Nantucket, near Surfside Beach. “A wonderful thing about golf is spending time outdoors, which is, of course, where I love to be out here on the island.”

Jacobson is one of greater Boston’s most beloved and recognized TV newscasters, whose warm smile and authentic reporting style charmed audiences for nearly four decades.

Retired from her news anchor role since 2007, Jacobson now spends the warmer months on Nantucket, and much of that season playing golf on the island’s breathtaking courses, like Miacomet and Sankaty Head.

Several years ago, though, her golf game took a back seat when Jacobson experienced devastating shoulder pain.

“My shoulder sort of fell apart—it was a complete tear of the rotator cuff. I had to lift the arm with my other arm. I’m not sure how it happened because I didn’t have an accident or any traumatic injury,” says Jacobson.

Two complex surgeries at other area hospitals failed to relieve her pain, and Jacobson says a full year after her second surgery she was still feeling an impingement in the shoulder when she swung her golf club.

“That’s when I went to see Dr. Curtis at New England Baptist Hospital.”

“At New England Baptist Hospital, almost all of the surgeons are super-specialized within our fields,” says Dr. Alan Curtis, one of the Baptist’s nationally renowned shoulder experts. “Many of my patients have had prior surgery before I see them and are still in pain. So at the Baptist, we have become very good at revision and other complex surgery—the techniques we use are the latest in the field; we don’t do things the quick and easy way.”

Dr. Curtis used a state-of-the-art arthroscopic (or minimally invasive) surgical technique to revise the rotator cuff repair in Jacobson’s shoulder, leaving her with full motion, no pain, less scar tissue, and a shorter recovery time than the traditional open procedures she had undergone at other hospitals previously.

“A lot of times, surgeons start off trying to fix something arthroscopically and then, if that doesn’t work, they open up the shoulder to do the procedure,” says Dr. Curtis. “At NEBH, we believe less is better so with more complex patients, we start and stay minimally invasive. There is very little unnecessary surgery at NEBH. In Natalie’s case, her revision got her back to golf.”

“Now I have full use of my shoulder and arm, thanks to Dr. Curtis, and I can’t say enough about him,” says Jacobson. “It’s exciting to work with Dr. Curtis because he’s optimistic, but he’s realistic; it’s clear he knows his stuff. And he explains things in a way a nonmedical person can understand, describing all of the options and what to expect after surgery.”

Jacobson says she was equally thrilled with her experience with the Baptist’s nurses, other clinicians, and non-clinical staff, before, during, and after surgery.

“It’s comforting for a patient with an orthopedic problem to go to a specialist at a specializing hospital,” she says. “The Baptist deals only with orthopedic issues, the physicians are at the top of their field, and everyone works together as a team. I also appreciate that surgery wasn’t the first thing that was recommended; if it’s not necessary, the doctors at the Baptist will work with you to find the best course of action.”

Jacobson appreciates her experience at New England Baptist Hospital so much, in fact, that she recommends the Hospital to friends and even her daughter, who recently had knee surgery with NEBH physician Dr. Brian McKeon.

“Thanks to Dr. Curtis and the Baptist, I’m playing the game I love as much as possible,” says Jacobson. “Every time you hit a bad shot in golf, you wonder why you play this game. But, a few minutes after your bad shot, you have another chance to hit a great one.”

If you would like to support shoulder research and care at NEBH, please contact the Office of Philanthropy at 617-754-6880 or philanthropy@nebh.org.