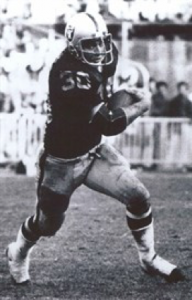 Mark van Eeghen is used to being in pain. Having played in the National Football League for 10 years (the 1977 AFC leading rusher spent 8 years and won 2 Super Bowls with the Oakland Raiders, and played for another 2 years with the New England Patriots), he has been tackled, battled, and bruised his fair share.

With all the wear and tear that playing in the NFL took on his body, it isn’t surprising that van Eeghen needed a knee replacement in 2003. 10 years later, in 2013, he underwent a revision surgery on that same knee at a local hospital, where he contracted MRSA (methicillin-resistant staphylococcus aureus) in his knee. There were two unsuccessful attempts to treat the MRSA, and when it came back a third time, “The hospital I was at said that my condition exceeded their expertise at that point, and I was high and dry without a doctor or a hospital.”

Unsure where to go or what to do, van Eeghen began calling friends and family.

“I heard from three or four different people to call New England Baptist Hospital. I didn’t have to hear it more than that. My first call was to the Baptist.”

“After my first meeting at the Baptist, I was feeding off of the physicians’ confidence immediately. They told me I had a very serious condition. But they also knew exactly what to do, they communicated the plan to me, and they worked as a team. There was no guessing over what procedure should be done when, no indecision as to which medication and what dose should be given—this is what they do, they’ve seen this before. Obviously the doctor and the previous hospital I was at had not.”

Recovery has been a slow and steady process, but now van Eeghen says: “I am giddy with my return to normalcy. I consider myself almost completely back. It’s as if I didn’t have surgery. I have no pain in my knee.” Equally as important, van Eeghen’s blood tests continue to produce normal results, and the MRSA is gone.

About seven months after his final knee surgery, van Eeghan decided it was time to tackle another problem he has been dealing with for years: chronic back pain caused by spinal stenosis.

“I was not going to any other hospital to do this,” says van Eeghan. Surgery and recovery went smoothly: “I am finally walking like people should walk. I have no back pain.” 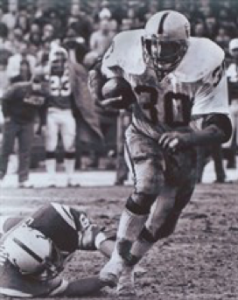 Van Eeghen’s advice to someone considering treatment at New England Baptist Hospital: “I would say you have just made the first and best decision that you could have made. I live in Rhode Island, I don’t care if it’s an hour drive to come see who I have to see, I’m going to do it. That is a drop in the bucket to be under the care of these trained professionals. It was the best decision that I ever made and I am beyond grateful for the hard work and job well done on my cases.”