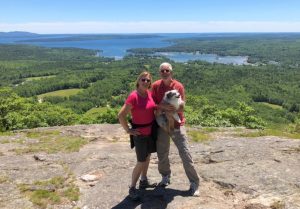 Kevin Whalen first turned to NEBH for help at the age of 19. A hip injury had turned into necrosis of the hip joint, a painful and hard-to-treat complication of bone or joint damage. Kevin was on crutches for four years as a number of doctors in New York state, where he lived as a child, tried and failed to help. Finally, someone recommended to Kevin and his family that he see Dr. Roderick Turner, a pioneer in the orthopedic field, at New England Baptist Hospital. In 1976, at the age of 19, Dr. Turner replaced Kevin’s hip, and a few months later, Kevin says, he was as good as new.

“It’s an understatement to say that the doctors at New England Baptist changed my life,” says Kevin. “I was on crutches for four years during high school—imagine that! And then, six months after surgery, I was shooting basketballs in the driveway.”

Kevin says that he learned from Dr. Turner (and, after Dr. Turner’s retirement, Dr. Donald Reilly at NEBH) that his hip prosthesis would not last forever, and that eventually, he would need to return for another hip replacement surgery, called a revision. He said it was important to him to be able to come back to the Baptist to receive follow-up care from physicians who are experts in joint replacement.

“I knew that if I ever had any type of complication with my hip, the experts at NEBH would have encountered it before, many times, unlike a regional hospital that does the occasional joint replacement,” says Kevin. “The patient benefits from that experience at the Baptist. It’s obvious to patients that every member of the NEBH staff shares a sense of common mission: being the absolute best at orthopedic solutions.”

Kevin and his wife, Ellen, donate to NEBH in gratitude for the decades of care Kevin has relied upon to keep up his active lifestyle. The Whalens’ unrestricted support over the years has been put to good use at the Baptist, supporting important hospital priorities, like scholarships for deserving nurses and research aimed at improving surgery and pre- and post-operative care for joint replacement patients.

“I contribute in the hope that NEBH can retain its focus and dedication” says Kevin. “I admire the excellence in orthopedics that has been a key driver for the Baptist, and I am encouraged that NEBH wants to continue to define state-of-the-art in joint replacement technology and surgery.”