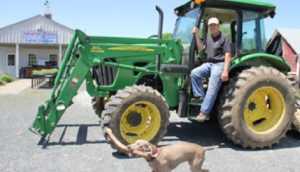 As a farmer, Jonathan Nourse has a physically demanding job. Climbing up and down from the tractor at Nourse Farm in Westborough, hauling heavy bags of seed, and kneeling in the dirt for 40 years had taken its toll. At age 64, he found himself hobbling around in pain with two badly damaged knees.

“My back started giving me problems because I wasn’t standing correctly,” Nourse says. “One knee was so worn down that one leg was shorter than the other.” Eventually the pain became so bad that it made it difficult to sleep.

On the advice of his primary care physician, Nourse sought out Dr. James Narius, an NEBH surgeon who also sees patients in his office space at Whittier Rehabilitation Hospital in Westborough. Narius recommended bilateral knee replacement—an extensive procedure to change out the damaged joints with artificial joints.

Nourse says he was confident in Dr. Nairus and the Baptist from the start, not only at the recommendation of his internist but because “everyone I talked to told me I should go to the Baptist. They specialize in orthopedics and their rate of infection is incredibly low.”

Following his successful surgery, Nourse went to Whittier Rehabilitation Hospital in Westborough for all his rehabilitation needs. Whittier has a clinical affiliation with New England Baptist Hospital and Dr. Nairus was able to follow Nourse at Whittier’s Outpatient Center.

“It was so convenient, and the physical therapists were wonderful,” Nourse says. “They really push you, but are so encouraging.”

Today, Nourse is back at the farm, minus the pain in his knees. He says he “highly recommends” New England Baptist to anyone needing joint replacement surgery.

“They’re top notch orthopedic specialists—the best of the best. If you’re in this area, why would you go anyplace else?”