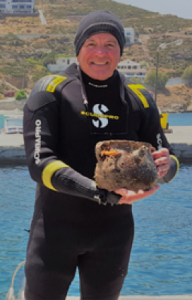 “Scuba diving is everything to me—my career, and my life’s passion,” says John Stella, NEBH patient.

John had just begun to take his passion for scuba diving to the next level by exploring ancient underwater wrecks when suddenly he was grounded: he fell on black ice and seriously injured his neck, fracturing a vertebra. This fracture threatened injury to his spinal cord, and without surgery, doctors warned, he might end up in a wheelchair, living with paralysis.

As he searched for a surgeon and hospital to treat his fractured vertebra, John says one question consumed his thoughts, filling him with fear and dread: “Will I ever dive again?”

That question was answered definitively at New England Baptist Hospital when John met Dr. Ohaegbulam—or, as John likes to call him, “Dr. O.” John says he felt an instant confidence in Dr. O and in the Baptist. And with the future of his diving career on the line, John felt the stakes were simply too high to go elsewhere.

Dr. O operated on John’s neck in June of 2014. By December, he was diving in Little Cayman.

John says he recalls being so impressed by Dr. Ohaegbulam—his professionalism, his warmth, and his communication skills. Yet John’s outcome is really what he is most grateful for. A year after his surgery, John was invited to dive in the Fourni Islands, Greece, as part of a team that discovered 22 ancient wrecks. Last year, he went diving off the coast of Greece on a mission that uncovered 23 more.

John was so grateful to Dr. O for keeping him in motion, deep beneath the waves, the he made a gift on Doctors’ Day to honor Dr. Ohaegbulam for the exceptional care he provided.

“Dr. O saved my neck, saved my life, saved my passion,” says John. “Because of him, I’m able to do what I love again.”