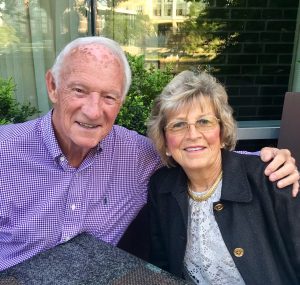 When Jim Kempf of North Kingstown, RI, first came to Dr. Rainville and NEBH, he was not new to back pain, nor to suggestions to improve it. After six surgeries elsewhere, many years of excruciating back pain and countless medications, a family friend and physician recommended that Jim travel to Boston and meet with Dr. James Rainville.

“When I first visited Dr. Rainville in 2015, I was in really rough shape. I could barely walk, was using a walker to help me get around; I couldn’t drive; and my confidence and mood were really down,” says Jim while reflecting back on this time. “At that point, I was taking a lot of drugs to help dull my pain.”

During Jim’s initial appointment at NEBH, Dr. Rainville remarked that he probably had one of the worst backs he had ever seen. He recommended that Jim begin a program as soon as possible. There was, however, a caveat to that. Jim would need to get off of all his pain medications in order to begin an extensive physical therapy program.

“There were definitely times where I really dreaded physical therapy because I was just in so much pain,” says Jim. “But they got me through it, and I had tremendous support from my doctors, family and friends.”

Jim describes a memory of a family vacation right after his first visit with Dr. Rainville. “We rented a house in New Hampshire with my entire family, but I never saw the house because I couldn’t move,” Jim says. “All I saw was my bedroom and the living room, with the help of my grandsons who carried me in and out. But I told them, I’m going to get better! Next vacation we have, you’ll see.”

After one year of physical therapy and being drug free Jim had a check-in with Dr. Rainville. He didn’t know what to expect, but he felt really good. Dr. Rainville immediately remarked, “You’re not the same guy who was here a year ago!” Jim had improved enough that Dr. Rainville was able to give him an injection of local anesthetic and steroid that reduces the inflammation in the joint space of the spine called a facet block.

“Four days later I took my wife on a trip to Maine. We hadn’t been able to enjoy travel, play golf ,or really even to be social for years, but I was no longer in pain!” The facet block, remarkably, eliminated Jim’s pain for almost two years, during which time Jim continued physical therapy and exercises.

Throughout the following years, Jim underwent another facet block, but, more importantly, he says, he has learned how to cope with his pain himself through activity, exercise, and heat, when necessary.

In gratitude for the care he has received at NEBH, Jim and his wife Marilyn are donors to New England Baptist Hospital’s annual fund, making gifts that support the hospital’s top priorities.

“It has been a tough road, but well worth it,” says Jim. “You need to be strong-willed, and you need to have commitment. I found that there are really four very important pieces to the process. To me, it was having the best doctors, support from your family, a great physical therapist, and making the commitment and sticking to it. It is easy to mask the pain with drugs, but you just need to remain strong-willed and committed throughout.”

Marilynn remarked that he is extremely determined and strong-willed. After 59 years of marriage, she knows that if Jim makes up his mind to do it, he will follow through.

“For years, I couldn’t do anything!” says Jim. “I couldn’t sit, and I couldn’t stand. NEBH truly saved my life and made my life enjoyable again.”