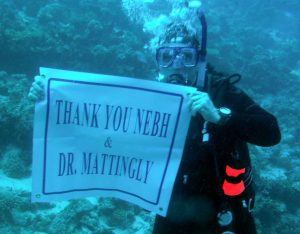 For Jim Furneaux, the problems with his knee started after a skiing accident when he was in his 30s. Although in pain for many years, he was able to continue his active lifestyle until 2009, when his knee began to give out. After increasing pain and loss of function, in 2011 he decided it was time to do something about it, when he was no longer able to participate in his favorite activity, scuba diving.

After undergoing an MRI, Jim’s primary care physician recommended he see a specialist. “There was no question that I would see Dr. David Mattingly at New England Baptist Hospital”, said Jim. “Dr. Mattingly performed a double knee replacement for my wife two years earlier, which was life changing.” Dr. Mattingly and Jim decided a total knee replacement would be the best treatment.

Jim had surgery on October 25, 2011. After surgery, he was looking forward to getting on the path to recovery. “I was very grateful for the nurses, nurse assistants and PTs who were so caring and helpful. I really believe there is no better focus on the patient than at the Baptist.” Recovery was a lot of work, but Jim’s hard work in physical therapy paid off. “Over the next four weeks I was very functional on crutches and by week six I felt stronger than I had for two years”.

Eight years later and now 75 years old, Jim is doing great. “I look back with true appreciation for the positive return to normalcy. I was able to return to my favorite sport, scuba diving. I also recaptured my feeling of physical zest for life. The life I love has been restored.”