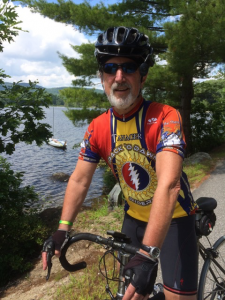 For exercise enthusiast David Osler, the arthritis pain in his hip that he had been experiencing for a few years had begun to take its toll. “It was pretty depressing to not be able to exercise, as well as just having difficulty walking, and being in constant pain.”

On the advice of one of his cycling friends, he sought treatment at NEBH with Dr. David Mattingly, Clinical Chair of Orthopedics and Surgeon in Chief, who told Osler he would need a hip replacement. “The experience was a little overwhelming at first – going in for what can be life changing surgery. But once I got past the front door everything was great. Everybody I met was warm, friendly, educational and informative.”

Osler was scheduled for surgery. “My surgery day was pretty straightforward. I was told it would take 90 minutes once Dr. Mattingly started. 7:30 was my start time, and at 9:00 he called my wife saying I was done.” His recovery at the hospital was smooth, but Osler was surprised how soon he was able to walk on his new hip. “The physical therapists and nurses were great, everything was terrific. One thing that I was really surprised about was when I was told I was going to walk from the stretcher after surgery to my bed. I remember thinking I can’t do that on a new hip. I was quite surprised that I could walk that first afternoon.”

Back at home, Osler’s recovery continued. “I never believed that I would come to my house and go right up a flight of stairs.” From there, after having surgery in September, by December, he was back on the slopes skiing. “I wasn’t out doing moguls, I was just doing simple stuff, but it was so great to be back.” He’s also back to cycling. “I’m back to biking a fair bit for someone in my generation. I can do 50-60 miles at a time and it’s quite comfortable, plus spin classes.”

Osler’s advice to those considering treatment at NEBH: “I would say do it. There was the fear of not knowing what was going to happen. But the experience was great, everything was pretty miraculous.”