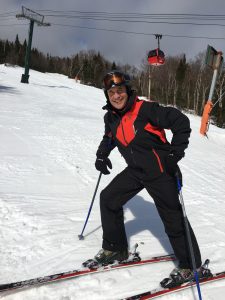 “I’ve been tough on my legs my whole life,” says Chris Jenny, NEBH Board of Trustees and Philanthropy Committee member, grateful patient, and philanthropic supporter. A lifelong skier and runner, Chris says that multiple bad breaks he suffered ski racing as a youngster had resulted in a slightly shorter left leg and, after four decades of distance running, the painful deterioration of his hip joint.

Chris, an executive and Chairman at Jennus Innovation, says that a surgical procedure at another Boston-area hospital failed to resolve his hip issues before he finally turned to NEBH for help.

“I talked to a lot of people about where they’d gone for orthopedic issues, and that made me realize that the next time I needed help, I’d be going to the Baptist,” says Chris. As he learned more about the hospital, Chris was asked to join the Board of Trustees. “On the board, I got to know David Mattingly (NEBH Surgeon-in-Chief) and his expertise as a surgeon, and then all of a sudden, boom, my right hip went downhill fast.”

After a recent hip replacement with Dr. Mattingly, Chris says he was amazed at how quickly he was back in action. “Before surgery, I couldn’t stand being less active, and just a few days after my surgery, I was bopping around again.”

Even better, he says, the patient experience was like nothing he’d ever experienced.  “One of the things I’ve learned is that it’s not just about the caliber of the surgeon. While that is incredibly important, it’s also about that whole hospital team—the nursing, anesthesiology, the pre- and post-op care, the follow up even when you’re back home. At the Baptist, that team works incredibly well as a system because they do more than 15,000 surgeries each year. The Baptist is just the very best at orthopedics, and I’m not saying that because I’m a board member.”

Chris and his wife Andi decided to give back in honor of Dr. Mattingly, and the NEBH caregivers who made his patient experience so exceptional, with a $500,000 gift to NEBH to support the hospital’s top priorities, including the recruitment of new surgical talent. Recently, NEBH added joint surgeon Eric L. Smith, MD, FAOA as Chief of Arthroplasty. Dr. Smith, who begins at NEBH on October 1, 2019, is a graduate of the NEBH Aufranc fellowship and a renowned expert in hip and knee replacement.

“Orthopedic health care has such a positive impact on so many people and NEBH is all about excellence in orthopedics, from the staff to the surgeons to the leadership,” says Chris. “Our gift was just a small push to integrate the latest tools, like predictive analytics and robotics, with the very top talent to help New England Baptist continue to raise the bar for orthopedic care everywhere.”