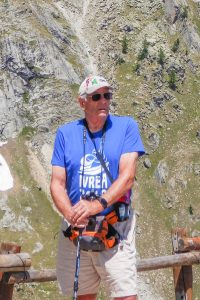 A retired engineer relies on NEBH to keep moving

Bob Friedenson doesn’t like to slow down. A retired electrical engineer and computer scientist from Andover, MA, Bob spends his free time cycling, hiking, traveling the world, and generally doing anything except sitting still. You’d never guess that he’s had three of his major joints replaced at New England Baptist Hospital.

“I’ve always been active, and I’m driven by my wife, kids, and grandchildren!” Bob says. “NEBH has allowed me to continue a very active life.”

Bob’s care at NEBH began in 2000, when he was diagnosed with an infection in his right hip joint. After months of care and multiple surgeries at another hospital failed to eradicate the infection, he was referred to NEBH’s Dr. Stephen Murphy, a joint replacement specialist. Dr. Murphy operated twice to reconstruct Bob’s hip joint, and after months of intensive rehabilitation, Bob was back on his bicycle. Just a few years later, he and his wife hiked in Utah and took a 300 mile bike trip across New Zealand.

Dr. Murphy also replaced Bob’s left hip in 2017 and knee in 2018. Since then, he traveled to Italy to watch a grandson compete in a world kayaking championship and walked miles each day. He says he’ll continue to spend winters hiking in Costa Rica and he’s planning to cycle a steep, long eleven percent grade hill at his 55th reunion at Cornell University next summer.

“I appreciate that Dr. Murphy combines surgical technique with engineering and medicine,” says Bob. “I spent my career in research and development, so we connected over our shared interest of using computers to aid in joint replacement and getting patients back to the things they love.”

Bob and his wife made a gift in honor of Dr. Murphy and the care he has relied on at NEBH.

“We support the hospital because we think it’s important that others can take advantage of the advances NEBH makes in orthopedics,” Bob says. “There are a lot of people whose conditions are very difficult to deal with on a daily basis, and if our support means more people have an opportunity to live a fuller life, we want to have an impact on that.”