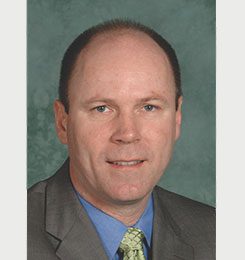 Dr. Stephen Murphy is an Orthopedic Surgeon at New England Baptist Hospital (NEBH) and Associate Professor of Orthopedic Surgery at Tufts University School of Medicine. He specializes in reconstructive and joint preserving surgery of the hip and knee. He earned his undergraduate degree in Engineering Sciences at Dartmouth College and his medical degree from the Weill Medical College of Cornell University. He completed his orthopedic residency at the Harvard combined program and completed two research fellowships in orthopedic biomechanics at Brigham and Women’s and Children’s Hospitals in Boston. His Maurice E. Muller fellowship in reconstructive surgery (in Switzerland with Maurice Muller and Reinhold Ganz), at Massachusetts General Hospital, and at the Brigham and Women’s Hospital) completed his clinical training.

Throughout Dr. Murphy’s career, he has designed implants and instruments, and has pioneered many new surgical techniques currently in use. He was one of the first American surgeons to popularize the use of peri-acetabular osteotomy for hip dysplasia and was the first to publish on the topic of femoroacetabular impingement.  He has been a pioneer in the area of computer-assisted orthopedic surgery and developed many of the algorithms used in virtually all surgical navigation systems in use throughout the world. He is also the developer and inventor of the superior capsulotomy minimally invasive method of performing total hip arthroplasty (nicknamed “supercap”) and co-inventor of the similar operation called “superpath”. The implants that he has designed have been used on all of the inhabited continents. Dr. Murphy was also the lead investigator for the largest multicenter FDA study of total hip arthroplasty performed to date which led to the approval of the use of ceramic-ceramic bearings in the United States. More recently, he invented and developed the HipSextant, a smart mechanical navigation system for hip surgery. He has more than twenty patents and patents pending in the US, Europe, Australia, Canada, Japan, Korea, and India.

Dr. Murphy is a member of a number of professional societies including American Academy of Orthopaedic Surgeons, American Association of Hip and Knee Surgeons, the Hip Society where he serves on the nominating committee, and the International Society for Computer Assisted Orthopedic Surgery where he has served as Chairman of the Executive Committee and President. He is widely published in the fields of arthroplasty, joint preserving surgery, minimally invasive surgery, and computer-assisted surgery. He is a diplomat of the American Board of Orthopedic Surgery and Consultant Reviewer for The Journal of Bone and Joint Surgery, Clinical Orthopedics and Related Research, and several other peer-reviewed medical journals.