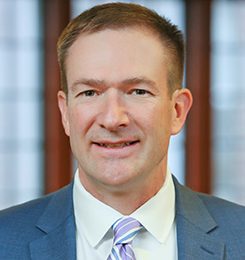 Eric L. Smith, M.D., FAOA is an Orthopedic Surgeon specializing in joint replacement, reconstructive surgery and revision surgery of the hip and knee at New England Baptist Hospital (NEBH). Dr. Smith is Chief of Arthroplasty at NEBH where he is involved in the clinical care of patients, research and teaching. Dr. Smith plays an active role in the Otto E. Aufranc Fellowship Program, where he provides advanced training to physicians in adult reconstructive surgery.  He is been Board Certified by the American Academy of Orthopedic Surgeons since 2004.

A prolific researcher, lecturer and educator, Dr. Smith has been invited to speak nationally and internationally. Over the years he has received over one-million dollars in research grants, including from the Orthopaedic Research and Education Foundation (OREF). He has been named a Top Doctor in Castle Connolly’s annual list each year since 2015. He was named outstanding orthopaedic educator at both Boston University and Tufts University orthopedic programs.

Prior to joining NEBH, Dr. Smith served as Chief, Division of Arthroplasty and Fellowship Director at Boston Medical Center. After receiving his Bachelor of Science degree in biology from the University of California at Davis, he earned his medical degree at Tulane University School of Medicine in New Orleans, LA and completed his residency training at Tripler Army Medical Center in Honolulu, HI.

Dr. Smith served ten years on active duty, during which time he was deployed to Afghanistan as an orthopedic surgeon in support of Operation Enduring Freedom. Dr. Smith is a four-time recipient of the Army Commendation Medal and has received numerous honors and awards during his career, including the Meritorious Service Medal and the Global War on Terror Medal.

Dr. Smith enjoys spending time with his wife, who is also an orthopedic surgeon, and their three daughters.